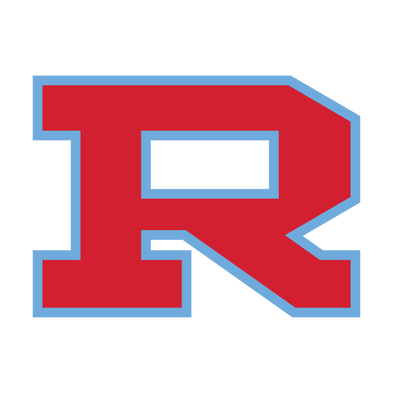 School Logo
The official school logo of Archbishop Rummel High School is the “R.”  The “R” was introduced to the school community in 1972 by head football coach Don Perret.  From 1972 through 1979, the football teams wore the same “R,” as it is known today, on the sides of their football helmets.

The “R” has become the most recognizable symbol of Archbishop Rummel High School.  After completing an intense marketing survey in 2005, the school chose to adopt this symbol as the official logo for the institution.  The “R” represents the same ideals that Archbishop Joseph Francis Rummel stood for – being Bold, Strong, and Unafraid. 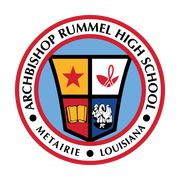 School Crest
The crest or coat-of-arms of Archbishop Rummel High School symbolizes the school in a fourfold manner.

In the upper left quadrant is the star of faith of the Christian Brothers.  This star symbolizes the faith of the faculty in youth and the faith which they seek to foster in their students.

Archbishop Joseph Francis Rummel is symbolized in the upper right hand quadrant by a hunting horn from his own coat-of-arms.

Dominating the lower left quadrant is an open book, symbolic of the knowledge provided by Archbishop Rummel High School and which is the basis of all the education and culture that is available to the students.

The seal of the state of Louisiana completes the rest of the lower right quadrant.  The pelican is the state bird of Louisiana.  This bird, which gives its blood to sustain its young, symbolizes the devotedness which should characterize the Archbishop Rummel High School student.

Separating and joining the quadrant is the cross, symbolizing religion, which keeps each endeavor of the school in its proper perspective and joins them all under its benevolent influence.