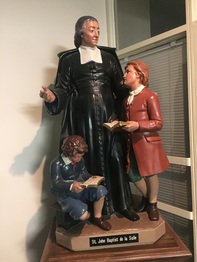 In 1982 when Brother Louis Welker, FSC, was appointed the school’s Campus Minister by Brother Brendan Hayden, FSC, principal, Brother Louis approached the Brothers’ Retirement Community in Lafayette, LA, asking if they would lend a statue of St. LaSalle to Archbishop Rummel High School.  The community agreed, so Brother Louis Welker and then chaplain Fr. Randy Roux drove to Lafayette in a school van and brought the statue back to school.

Mr. Elward Whitfield, AFSC, maintenance craftsman, built the stand where the statue rests.  The statue is located at the main entrance on the school campus across from the receptionist desk.